You should be well-acquainted by now of the physical benefits of yoga. But what makes yoga so good is that it’s more than just that.

Yoga is also a spiritual discipline, and it helps not only your body, but also your mind and soul. But then you might wonder how and why, exactly.

That’s why in this article I will be exploring 10 reasons why yoga is a spiritual discipline.

1) Yoga is rooted in Dharmic spirituality.

In order to talk about yoga, we must first go back to its very roots—into India, its religions, and the philosophy that gave rise to the tradition.

The word “yoga” itself comes from the Sanskrit root “yuj”, which means “to unite” and is related to the English word “yoke.” And this gives a hint as to what yoga is about.

It’s a discipline that’s meant to help you control or yoke your senses, and then eventually your mind.

And its practices are deeply rooted in the Vedas of the Hindu faith. It was described in the Bhagavad Gita, where the deity Krishna spoke of four types of yoga, all of which are necessary if one is to achieve understanding.

So you see, yoga is very much a spiritual discipline more than a physical one. And you only have to look at its roots to see this.

2) Yoga helps you connect with your true self.

There are four kinds of yoga— jnana, karma, dhyana, and bhakti. And each one of these encourages you to know yourself and your role in this vast universe.

Jnana yoga or jnana marga is also called the path of knowledge. It concerns itself with achieving enlightenment and understanding through knowledge.

Karma yoga is the path of action. You might have known of the concept of “karma”, commonly known in the idea as the universe paying back your actions in kind.

Bhakti yoga is the path of worship. One who seeks enlightenment through this path does so by offering oneself in loving devotion to their spiritual deity.

Whatever form you might be practicing, it will involve getting in touch with yourself to find and deal with any abnormalities in the flow of chakra through your body.

Through yoga, you will understand just truly how you feel, or what you’re like when your energies are flowing freely, and what happens when they’re clogged or blocked somewhere along the way.

This, and the heightened sense of awareness and introspection that comes with being deep into yoga puts you in touch with your genuine self.

3) Yoga attunes you to the universe.

Every single one of us resonates with everyone else, and with the universe itself.

But this natural resonance is drowned out by the things we concern ourselves with in our day-to-day lives, from the highs and lows of romance to the tedium of labor.

The reason why partaking in yoga attunes your mind to the universe is that it peels away all these distractions.

Your natural resonance is bared for you to see and know, and through that, you’ll know your place in the universe.

It’s like leaving the noise of the big city to listen to the sound of nature in the countryside. You’re more connected to your inner world as well as to the world around you.

Every time you sit in one corner to do yoga, you’re clearing your mind and opening yourself to the messages that the universe is trying to tell you.

Yoga’s primary goal, since it came into being over two thousand years ago, is the union of body and mind.

This is symbolized in the lotus sitting position many of us are familiar with.

Hindu symbolism represents the soul as the lotus flower, dwelling in the immaculate heavenly realm. The body, on the other hand, is represented by the lotus root, which dwells in the muddy river bottom.

The lotus flower is a powerful image in Dharmic consciousness. It begins its life in the muddy bottom of a pond, before breaking through the surface and unfurling in ethereal beauty.

This symbolizes man, whose body dwells in a filthy and imperfect world, and whose soul blossoms in the sublime realm of the divine.

And in between is the stalk, uniting the body and soul.

Yoga seeks to help you be aware of and strengthen this stalk—to bring the earthly closer to the heavenly, and to promote such harmony between them that they unite.

A perfect union is hard to achieve and takes years of effort. But with it comes understanding and enlightenment.

5) Yoga puts you in tune with others. 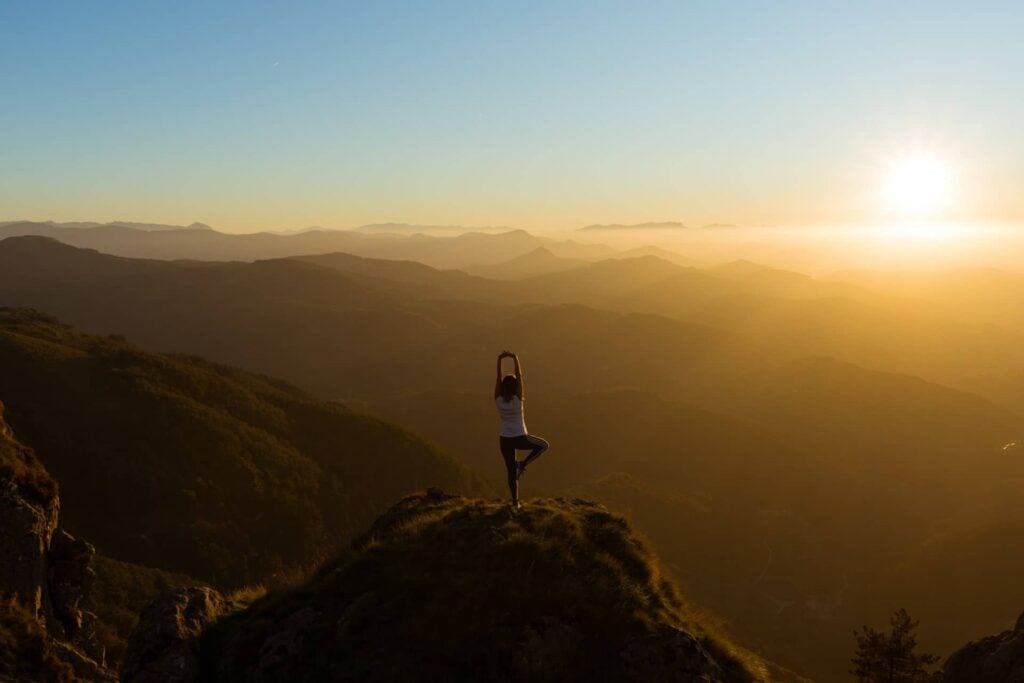 Being in tune with the universe and with yourself has another side effect, and that’s you’ll also find yourself in tune with other people.

The insight you get into your own nature—your flaws, your strengths—will help you understand even those people whose lifestyles or backgrounds are unlike yours.

This shouldn’t be too surprising, since yoga is one of the best ways through which you can open the heart chakra, which is the chakra associated with love and interpersonal relationships.

It’s quite possible that without actively intending to do so, you’ve opened your heart chakra.

By practicing yoga regularly, you become a calmer, more patient, and more tolerant person, and you will see its effects on your relationships.

Being more in tune with others grants you greater compassion.

The harmony it offers lets you see past your differences and truly see others as fellow human beings.

It might seem like it should be natural to think “oh, of course, they’re people too”, but the reality is that in this day and age we are barely encouraged to look past people’s names and faces. Most of the time, people perceive others only superficially.

Yoga—and most especially kundalini yoga, due to its focus on cultivating self-awareness—goes a long way towards helping you empathize and sympathize with other people by opening up and connecting to them on a spiritual level.

When you’re practicing yoga, it’s almost a guarantee that you’ll become a more understanding human being.

Your annoying co-worker will become more tolerable. The next time you see a grumpy old woman, you’ll not see someone with detestable qualities. You’ll see the goodness of the person and think that the woman is probably in a bad mood because she feels lonely or she’s carrying a heavy burden.

Compassion is such a wonderful gift you get from yoga. And the world will certainly be a much better place if everyone practices it.

7) Yoga helps you regain control over your emotions.

Anyone who’s ever done yoga seriously for a decent period of time can attest to how it gives them control over their emotions.

Instead of being ruled by their mood swings or sharp temper, they become more sedate and calm.

And this makes sense.

One of yoga’s first and most important functions is to yoke your mind—to put it under your control.

This is an important step to achieving enlightenment and is why yoga has always been important to Dharmic monks and ascetics.

As a result, yoga also gives you greater control over the totality of your physical existence, and your emotions are one of the things you wrest control over. The more you master yoga, the better the degree of emotional control you gain.

If you consider yourself high-strung and easily irritated, there is no doubt that yoga will be good for you.

8) Yoga gives you the strength of will.

When you have control over your mind, it becomes easy to shore up the will to carry on despite what adversity and suffering you might face.

Yoga reminds you that the flesh is but part of who you are and that your mind is within your control.

You are above whatever temptations you and desires you may face, be it lust or even the desire to simply give up your struggles.

The more you master yoga, the easier it becomes to assert your will over every aspect of your existence. At the most extreme, you gain the ability to completely ignore any and all pain and suffering are thrown your way.

That said, yoga will still have plenty of benefits to offer even if you don’t achieve that degree of proficiency.

Devoted yoga practitioners will find that their sense of intuition is sharper than everyone else’s.

This should not be too surprised if you take a moment to consider where intuition comes from.

Intuition is your higher self, talking with your lower self.

When the distance between your two selves is great, then your higher self’s messages to your earthly self are faint. Think about how it’s harder to listen to someone speaking from thirty paces away as opposed to when they’re right next to you.

Yoga brings your two selves closer, which means that you can more readily hear whatever your higher self has to say. Because of this, you feel your intuition grow sharper.

Develop and practice this more often and you’ll get better at navigating your life and making important decisions.

We go through so many things in our daily lives that give us psychic wounds.

Things as big as witnessing someone getting hurt, and things as small as being told you’re not good enough.

These wounds manifest as disruptions in the flow of energy through the body. Unlike physical wounds, these psychic wounds never stop bleeding until they’re dealt with.

Finding and fixing these blockages through yoga helps your mind heal. It’s like finding an open wound and applying bandages and a cold compress until it gets better.

Eventually, you get those energies flowing freely through your body again, granting your mind relief.

Having the skill to self-soothe and recover is one of the best gifts yoga can offer, and you can teach yourself to do this by choosing the right kind of yoga and affirmations for healing.

Yoga is a tradition that has existed for over two thousand years. And since the very beginning, it has always been a spiritual discipline.

In fact, it has been about the metaphysical before it came to be about the physical. This is why yoga is so good at what it does, and why it is more than simply a “workout routine.”

You’re not just fixing up your stressed body, you are also touching on and repairing the bonds between your body and your soul.